The production and packaging of products is not part of our services, or only to a very small extent. Therefore, recording according to renewable and non-renewable materials is currently not feasible.
A quantitative overview of the resources consumed and the materials used is currently not available.
Developing such an overview with a focus on the essential materials is part of the implementation strategy. Relevant resource and material consumption relates to plastics, metals, chemicals, paper, electric devices, and packaging materials.

In the current reporting year, consolidated consumption data was collected for the first time for a significant consumption factor of the Dussmann Group, the use of chemicals:

a. Total fuel consumption within the organization from non-renewable sources, in joules or multiples, and including fuel types used.

b. Total fuel consumption within the organization from renewable sources, in joules or multiples, and including fuel types used.

e. Total energy consumption within the organization, in joules or multiples.

Due to the expansion of the reporting basis to include further Group companies, a comparison with the previous year is not meaningful.

The kilometers driven could not yet be fully consolidated in the reporting year. 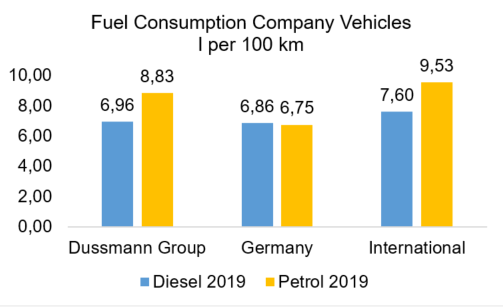 The consumption values shown accordingly represent only a part of the entire Group.

a. Amount of reductions in energy consumption achieved as a direct result of conservation and efficiency initiatives, in joules or multiples.

b. Types of energy included in the reductions; whether fuel, electricity, heating, cooling, steam, or all.

c. Basis for calculating reductions in energy consumption, such as base year or baseline, including the rationale for choosing it.

In 2019, the energy consumption in Germany was 135 GWh (see performance indicator GRI SRS-302 1). Natural gas, electricity and diesel consumption are the largest items.

Within its own building operations, the company strives to continuously reduce energy consumption through efficient technology (e.g. LED lighting), smart building control, and deliberate handling. One specific example of this is the conversion of the lighting at the Kulturkaufhaus and in the Vertical Garden (exchange of conventional lighting technology in favor of LED). This resulted in the saving of over one GWh of electricity with constant operating time. We are not able to make any reliable statements on the effectiveness of energy saving measures and the obtained savings at the group level.

In its cooperation with customers, Dussmann Service works in an advisory role in order to bring energy-saving services, products, and processes onto the market.

a. Total water withdrawal from all areas in megaliters, and a breakdown of this total by the following sources, if applicable:
i. Surface water;
ii. Groundwater;
iii. Seawater;
iv. Produced water;
v. Third-party water.

d. Any contextual information necessary to understand how the data have been compiled, such as any standards, methodologies, and assumptions used.

All Dussmann Group companies obtain water within their own (administrative) building from the local utilities. Consolidated data on water and sewage consumption is not available.

Data on the waste output is not quantitatively recorded. Waste and recycling management, however, is currently the subject of different initiatives and approaches with the goal of better recording consumption data, reducing waste, and strengthening recycling.
For Dussmann Catering, the handling of food waste is an important component of environmental sustainability in this field of business, as well as a relevant factor with regard to economic calculations. This is why we strive to record in greater detail and continuously reduce the amount of waste.

Dussmann Service Deutschland GmbH is a member of the initiative "United against Waste," which aims to raise awareness of the issue of food waste, to carry out waste measurements in various companies, to carry out a monetary evaluation of waste and to identify potential savings.
In doing so, we are tying into the sustainable development goal from the United Nations SDG 12 "Responsible Consumption and Production." Here, the approach to reduce worldwide food waste by 50% by 2030 was formulated. The Dussmann Group wants to contribute towards this. The European commission presented a package of measures for the recycling economy that suggests objectives for the recycling and depositing of waste and includes measures towards which our actions are oriented.
Special attention is given particularly to avoidable waste, meaning waste that is still fully edible at the time of its disposal; specifically, waste from the warehouse, from production, from overproduction, as well as food left on plates (unavoidable food waste is waste that which predominantly contains nonedible components). The efforts being made in our catering business to avoid and reduce waste are always conditional upon customers’ cooperative and financial readiness.

Packaging waste is accrued within the scope of cleaning management and technical systems and equipment. We want to reduce these amounts of waste through the consistent usage of alternative packaging materials and the optimization of packaging sizes.