The company discloses the GHG emissions in accordance with the Greenhouse Gas (GHG) Protocol or standards based on it and states the goals it has set itself to reduce emissions, as well as its results thus far.

The commitment: Carbon-neutrality by 2030
The climate-policy goals are developing quickly, and FMG’s standards are high. These two parameters are the foundations of Munich Airport’s climate goal: From 2030, the airport will be carbon-neutral – the first German airport ever to be so. To achieve this, the Munich Airport Group is reducing the greenhouse gas emissions that can be attributed directly to its operations by at least 60 percent using various technical measures. The remaining 40 percent are to be balanced out by suitable compensation measures, preferably within the region. This climate protection goal adopted in December 2016 is significantly more ambitious again than the previous goal to achieve carbon-neutral growth by 2020. Flughafen München GmbH is investing 150 million euros by 2030 to achieve this target, almost an entire year’s net profit.

CO2 emissions per passenger are sinking further
FMG has lowered carbon emissions from around 162,000 tonnes in the reference year 2005 to around 150,000 tonnes to date. Had the some 249 individual measures not been taken, CO2‚ emissions at Munich Airport would have been around 36,000 tonnes a year more than they actually are. Added to that is the more than 400 tonnes of savings generated by the commissioning of the first large-scale photovoltaic system by the Munich Airport Group on the roof of the P51 parking structure. In 2018, Flughafen München GmbH invested around 2.1 million euros to reduce greenhouse gas emissions by 3,667 tonnes in the long term. The improved energy efficiency is particularly evident in this comparison: While passenger figures at the airport have increased by around 62 percent since 2005 and the building areas have grown by around 16 percent, the CO2 emissions of buildings, systems, and vehicles fell by some seven percent. CO2 emissions per air passenger in the same period thus fell by 43 percent. These successes make it clear that even the most ambitious of climate goals can be achieved by continuously improving efficiency in existing stock, through sustainable building construction, and through the increased use of renewable energy.

With its block heat and power plant, the airport generates over half of its on-site energy requirements using natural gas. The waste heat generated from this alone covers almost all of its heating and cooling requirements without requiring the use of additional energy. The airport then covers its remaining heating requirements by procuring district heat from Fernwärmeversorgung Freising. In turn, 50 percent of the purchased district heat – i.e. around 14 Gigawatt hours (GWh) – comes from a biomass thermal power plant in Zolling, which reduces the CO2‚ emissions by a further 3,000 tonnes approximately per year. If the heat and power were generated separately in the mix applied in the Federal Republic of Germany, the amount of CO2 produced each year would be 40,000 tonnes higher.

Less than a third of the power used on the airport campus comes from external energy providers. Overall, emissions produced by the external procurement of power and district heat have decreased by 25 percent since 2005. Looking at the Munich Airport Group alone, this figure has fallen by almost 50 percent. This is down to the new, even more efficient engines for cogeneration of heat and power on one hand, and reductions in power consumption on the other.

Renewable energy from photovoltaic systems
In its drive to achieve a carbon-neutral airport, Munich Airport is also using renewable energy. The first larger-scale system of this type with an installed rated output of around 750 kilowatt was realized in the summer of 2018 on the new P51 parking structure. It generates around 730 megawatt hours of renewable electricity per year and thus saves 423 tonnes of CO2, annually. An expansion will take place in 2019. By 2030, systems with a total output of up to 20 megawatts are planned.

LED upgrade of aprons completed A milestone has been reached on the path toward a carbon-neutral airport:
After a six-year implementation phase and investment of more than two million euros, the airport has completed the upgrade of the apron lighting to energy-saving LED technology.  With 185,000 LEDs in around 1,900 lamps on lamp posts standing up to 34 meters tall, Munich Airport boasts one of the largest LED high mast systems in the world.  The new LED lighting impresses with its particularly high levels of energy efficiency combined with better light output, longer service life, and low maintenance costs. Already, the airport is saving around 14,700 tonnes of CO2 through the optimized lighting alone – about one fifth of that is attributable to the aprons. Time for the next major project: The external lighting in the public areas of the airport will be also be switched to LED technology by 2022.


E-mobility on the rise
As part of its climate protection program, Munich Airport uses alternative fuels from renewable energy sources within its vehicle pool:
The proportion of electric vehicles is rising significantly: By 2030, they should comprise the lion’s share of the vehicle pool. In 2018, Munich Airport replaced a further 85 of its older vehicles run on gasoline or diesel. Electric vehicles currently comprise more than 20 percent of the current vehicle pool. The six-figure, environmentally-friendly investment is supported by subsidies from the German Ministry of Transport. Compared to 2017, it proved possible to reduce the local emission of CO2 by around 76 tonnes.


Synthetic fuels from waste
The new fuel «C.A.R.E. diesel», which is made from residual and waste materials as well as from renewable raw materials, also promises further potential. A successful practical trial was started in November 2017 in the road sweeper fleet. It has been possible, with approximately 60,000 liters of C.A.R.E. diesel, to avoid around 157 tonnes of CO2 emissions compared to conventional diesel. Use of this fuel has meanwhile been discontinued. 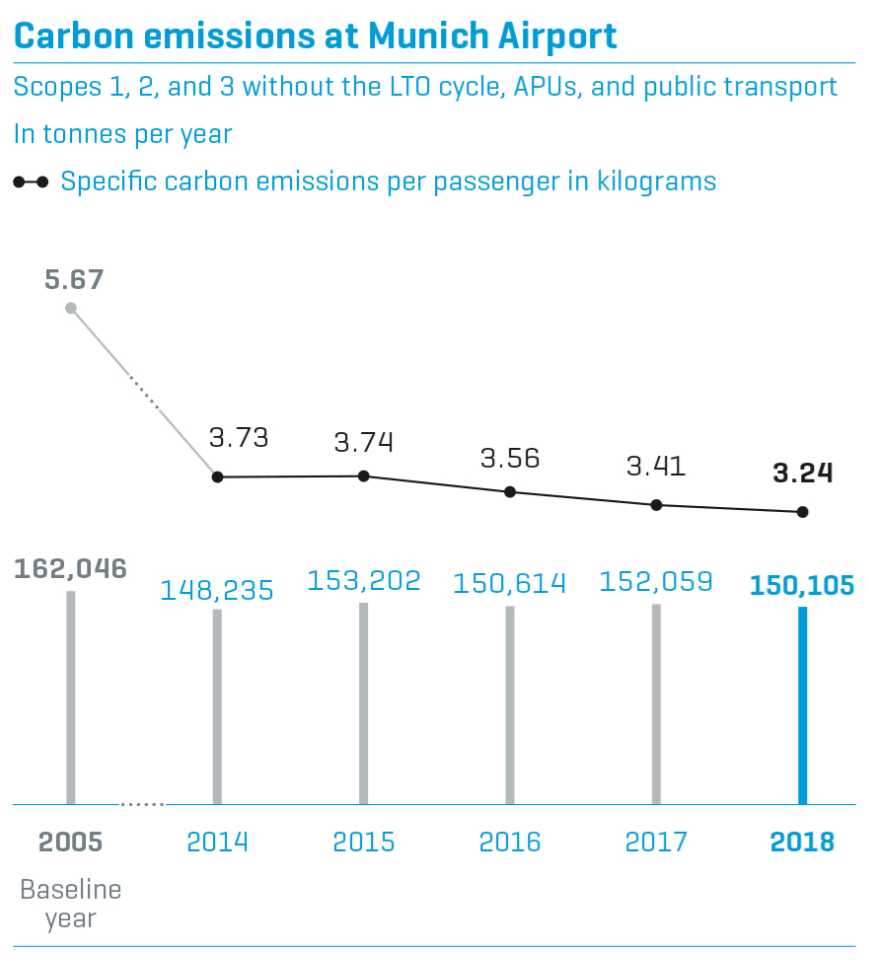 One of the most important elements of CO2 management is the CO2 database, which was developed by FMG and serves as a reporting, control, and monitoring instrument for all activities relating to CO2 reduction and energy efficiency.

The carbon footprint is calculated according to the specifications of the internationally recognized Greenhouse Gas Protocol, which divides emissions into three categories according to the polluter pays principle:

(LTO cycle: The landing and take-off cycle refers to an aircraft’s CO2 emissions on the ground and during take-off and landing below an altitude of 3,000 feet (914 meters). Up to this internationally defined height, any greenhouse gases associated with aircraft turbines are attributed to the airport concernedand distances from the airport of about eight kilometers in the case of departing aircraft, depending on the climbout,and 17 kilometers in the case of arriving aircraft.)


Scope 3
One important factor in the climate protection strategy is the new pre-conditioned air systems (PCA systems). Since fall 2016, this technology has been supplying aircraft parked in the parking positions next to the buildings at Terminal 1, Terminal 2, and at the satellite building with pre-conditioned air. As a result, the aircraft no longer need to run their auxiliary power units (APUs), which are responsible for high levels of noise, carbon emissions, and other air pollutants. In 2018, the operating times of the 64 PCA systems increased further, which lead to a reduction of 18,364 tonnes of CO2.

Flughafen München GmbH together with the airlines and the companies based at the airport also improved other climate protection measures in 2018, such as the environmentally-sound continuous descent operations (CDO) and the optimized taxiing system (ACDM; Airport Collaborative Decision Making), which reduces taxiing times.


Participation: BDL, ACI, CDP, AC
In conformity with risk management, the implications of climate change are investigated and evaluated as part of CDP reporting. In this way, FMG addresses the physical, regulatory, and other relevant risks and opportunities every year. To reward its commitment to reducing climate-relevant emissions, FMG achieved a top result in the CDP once again in 2018. As well as a transparent overview of the climate protection strategy, the CDP also evaluated climate figures, and the quality and efficiency of carbon reduction measures.   For the eight consecutive time, the European airport organization ACI EUROPE awarded FMG Level 3 – Optimization for its 2017 Airport Carbon Accreditation following the successful reduction of carbon greenhouse gas emissions.


Commitment to environmental standards
Munich Airport continues to be a partner in national and international airport organizations. By collaborating closely with industry associations, particularly the German Airports Association (ADV), the German Aviation Association (BDL), and the Airports Council International (ACI) Europe, FMG has access to current information from the aviation industry and helps to ensure that the industry’s interests are represented collectively. Representatives of Flughafen München GmbH are involved in environmental protection working groups at German and European level. The topics covered extend from development planning in the area of airports, to the development of systems for environmental indicators, and recommendations for noise and climate protection measures.

Influence of road and air traffic
The assessment of air quality at the airport and in the area around the airport looks at a number of important factors, including nitrogen oxide NOx, sulfur dioxide SO2 and particulate matter PM10 and PM2.5. In terms of air pollutants, as with CO2 the aircraft cause significantly more emissions than the ground traffic on the apron, feeder roads, and service roads. It is not possible however to differentiate between the immissions metrologically.

Landing charges are also calculated based on nitrogen oxide emissions
Flughafen München GmbH levies emissions-based landing charges. This gives engine and aircraft manufacturers a long-term incentive to invest in the development of aircraft that produce less in the way of harmful emissions. Munich Airport is thus actively contributing to better environmental quality in its environs. With the information on the aircraft types that have landed, the airport can record the contaminants – including CO2 – specifically for the engine, and directly map the technical progress.

Fixed and mobile measuring points
The air quality at Munich Airport is continuously monitored at two measuring points. The measurement stations in the western and eastern areas of the airport record the effect of the sources of pollutant emissions from road traffic, air traffic, and other airport operations – overlaid with the background levels from the Munich metropolitan area and the natural background concentration in the atmosphere. The contaminants ozone, nitrogen monoxide, nitrogen dioxide, sulfur dioxide, carbon monoxide, benzene, toluene, xylene, dustfall PM10 and particulate matter PM2.5 are monitored. The applicable statutory limits for the protection of human health were once again met in 2018. For particulate matter PM10, there were twelve (permitted) breaches of the statutory 24-hour limit. The 2018 annual averages for the key parameters of nitrogen dioxide (NO2) and particulate matter were in fact significantly below the limits, as they have been in previous years.

Munich Airport is the first airport in Germany to additionally determine the quality of air using a mobile air quality measurement station. It measures the same substances as the stationary measuring point in the east of the airport in specialist investigations conducted over several months in the surrounding municipalities. In 2018, the mobile measurements took place in Wartenberg and Haimhausen. The measured concentrations were below the statutory limits and thus confirmed the results from the stationary measurements. 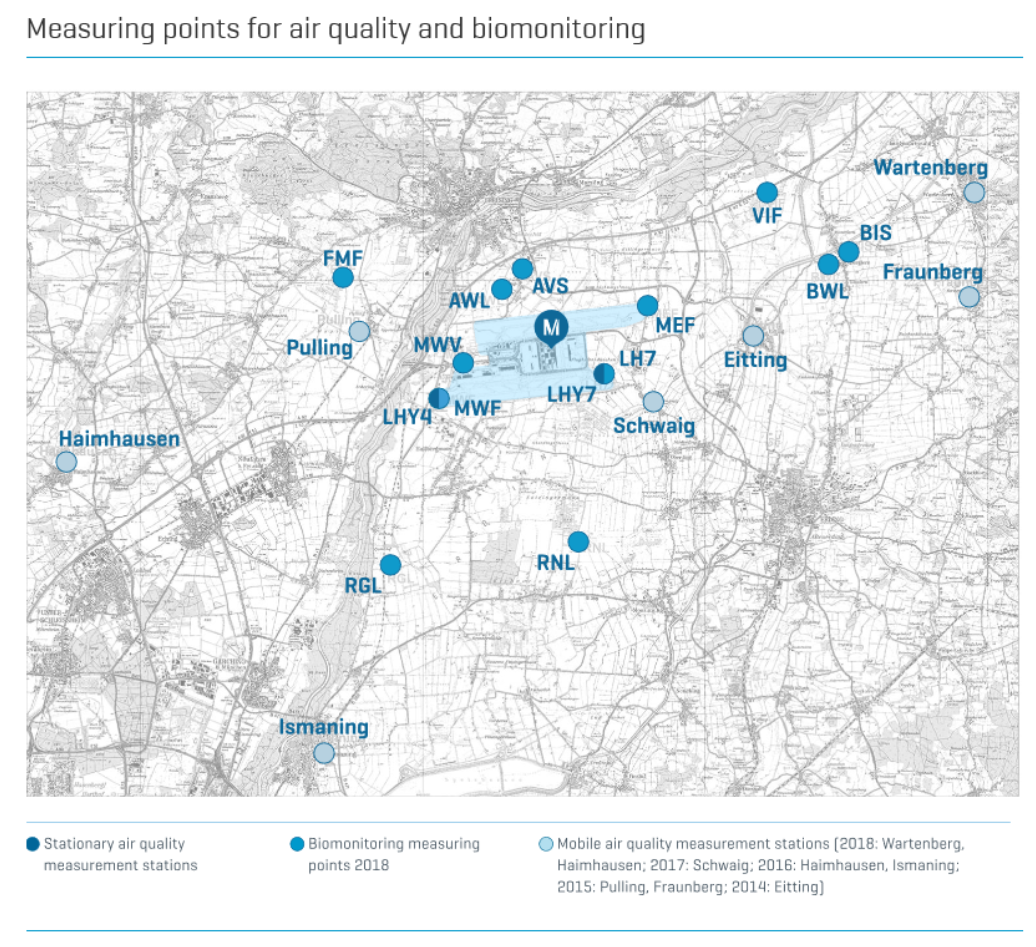 Keeping track of contaminants
Long-lasting contaminants can accumulate in the environment and therefore seep into the food chain. Munich Airport has been monitoring this situation for many years using a variety of methods. In 2018, plant pots containing Italian ryegrass and kale, and pots for collecting dustfall, were set up at twelve measuring points around the airport site. 240 grass cultures and 36 kale samples provide around 1,700 measurements per year relating to air pollutants and their impact. Work also continued on the honey monitoring project in 2018. 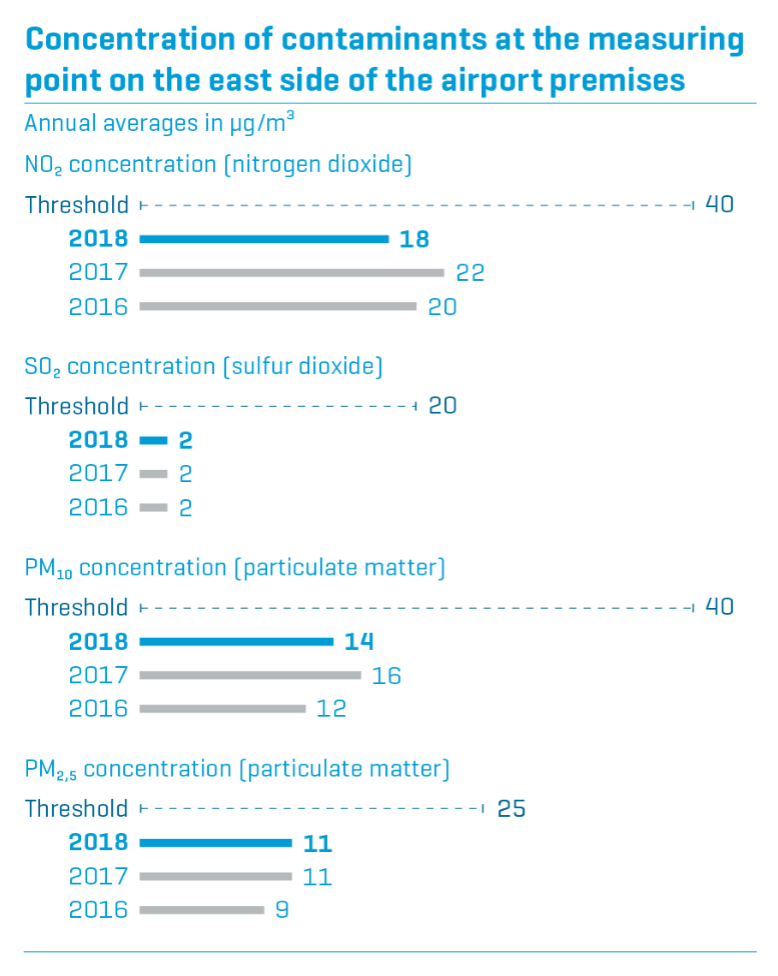